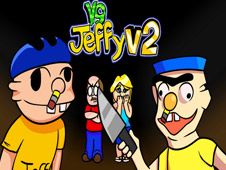 What is FNF vs Jeffy v2 Mod?

We've now dropped for you all the FNF vs Jeffy v2 Mod, for which we are positive many of you were waiting for, since the character became an instant hit when he made his Friday Night Funkin' debut, but today you get to go up against him on even more songs than before, surely having tons of fun from start to finish, as you can always have with our amazing content! The tracklist is:

Boyfriend Vs Jeffy, Round 2, begins!

Make your choice between the story mode and free play mode, and then give your best to reach the end of the songs by playing all of their notes according to the charts. To do that, press arrow keys at the same time as the identical arrow symbols are matching above your character. If you miss hitting the notes multiple times in a row, you lose and have to start everything again from scratch. Enjoy!