FNF vs Ankha (Dive into Egypt)

FNF Vs Ankha (A Tail of Trouble) 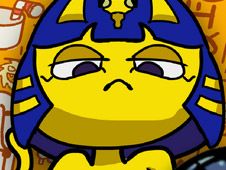 What is FNF Vs Ankha (A Tail of Trouble)?

Ankha is an Egyptian cat that comes from the Animal Crossing game, which would be one of the few crossovers between that video game and the FNF Games we have here, something we are very excited about, as we are sure you will be having tons of fun rhythm dueling this cat on the song known as “camel-by-camel”.

Boyfriend Vs Ankha, an ancient rivalry!

Well, what you need to be doing is watch for when the arrow symbols above BF's head match with one another, and, when they do, press the same arrow keys yourself, something that you need to keep doing until the end of the song in order to win.

Be very careful not to miss pressing the keys too many times in a row, or you lose. Good luck to you all, and we definitely hope that you stick around for all the fun yet to come!