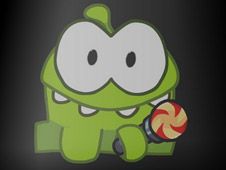 What is Friday Night Funkin vs Om Nom?

Om Nom is a cute frog-like creature from the Cut the Rope Games series, which loves nothing more than to eat the candy that you get to give it by cutting the ropes that it is dangling by, but now he has stumbled into Boyfriend's territory, as you have to help BF defeat it in a rap battle to send it back to its own world, and you will do it on the following custom songs:

Winning is sweeter than candy, so defeat Om Nom in a rap battle right now!

Whether you are enjoying the aforementioned tracks in the story mode or the free play mode, the goal you have is identical, and it is to reach the end of the songs by playing all their notes according to the charts, and once you have done so and reached the song's conclusion, you will have become the winner.

To do all this you use the arrow keys, pressing them at the same time as arrow symbols above BF match one another, but be careful not to miss pressing the keys too many times in a row, since that leads to you losing. Good luck, enjoy!