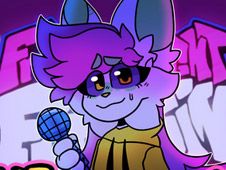 What is Friday Night Funkin vs Che?

Che is a feline-looking busker with whom Boyfriend and Girlfriend casually meet on the streets, and the two of them are going to get at it through a music battle, one that you also get the chance to take part in, where you will have tons of fun on a few awesome original songs:

Boyfriend Vs Che, a colorful music battle is about to begin!

Well, for starters, you will pick between the story mode and free play mode, having the same goal in either of them, which is to reach the end of the songs by playing all their notes according to their charts, something that you do by pressing the arrow keys at the same time as arrow symbols match above BF's head.

Be careful not to miss pressing the keys too many times in a row, since that will lead to you losing and having to start the game again from scratch. Enjoy!