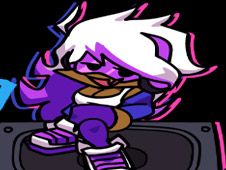 What is FNF vs Anniversary Mod?

It's the one year anniversary of FNF, and talented modders have decided to create a mod that is a tribute to that, where you will be presented with a combination of remixes of classic songs, as well as fresh new originals, as well as a bunch of new characters to face off against. The list of songs is the following:

Choose between the story mode and free play mode, but know that no matter how you play this game, the way to win it is the same, and it is by reaching the end of the songs, which can only happen by playing all their notes according to the charts.

To do this, watch for when arrow symbols above BF match one another, which is the moment when you have to press the identical arrow key from the keyboard.

If you press the wrong key or the right one, but too early or too late, that counts as a miss, so be careful, because multiple misses in a row will lead to you losing. Enjoy!