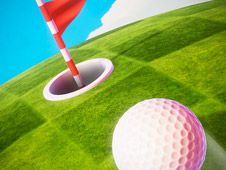 What is Minigolf Tour?

Are you ready to go on the Minigolf Tour? We hope so because we've never had minigolf games multiplayer online added here as awesome as this one, since it has a simple premise, easy-to-understand gameplay, and is far from being boring, that's for sure, so sharing it with you right now was a must for us!

Win the minigolf tour of the world!

After you complete your practice, and after you choose your name, enter the competition against other real players from all over the world, with up to five players on one map, with each of you having their own ball. The goal is to get your ball into the hole faster than the others, and with as few shots as possible.

Use the mouse to make the shots, dragging and aiming towards the hole, and then release to make the shot. The more you drag, the more power you will have behind your shot, but you should be careful not to overdo it since too much power might make you miss. Try winning as many of the tour's legs as possible so that you climb in the world rankings and become a top player. Good luck!