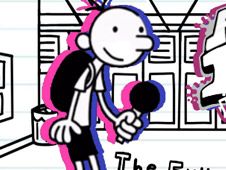 What is Friday Night Funkin vs Greg Heffley (TFAF)?

It really is time for an FNF x Diary of a Wimpy Kid mod in full, which is what we offer you here to play with this FNF TFAF mod, where you and Boyfriend team up against Greg Heffley, the stickman protagonist of this children's book series on all the following songs:

Help Boyfriend win Vs Greg, and don't be wimpy!

Whether you play in the story mode or free play mode, winning is done in the same way, by reaching the end of the songs and to do that you need to keep hitting your notes until the song's conclusion. This means that when you see arrow symbols float and match above BF's head, that is when you have to press the identical arrow keys.

Pressing wrong keys, or pressing the correct ones too late or too early means a missed note, so be careful, because if you miss too many notes in a row, you lose. Good luck to you all, and stick around, more awesome mods are coming right up!