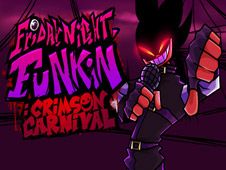 What is Friday Night Funkin’ VS Jon – Crimson Carnival?

Jon is a tall and creepy clown met by BF at the Crimson Carnival in FNF, and now the two of them will be having a rap battle against one another, because what else would they be doing? The song is called 'Maniacal'.

BF VS Jon, the main attraction at the Crimson Carnival!

To win the confrontation you need to reach the end of the song, and to do that you need to keep hitting your notes until the song's conclusion. To hit notes, press arrow keys at the same time as the identical arrow symbols match above BF. If you miss hitting notes too many times in a row, you lose and have to start again from scratch, so don't let it happen. Enjoy!