That One (Cancelled) Sonic FNF Mod 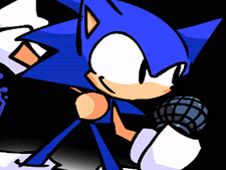 What is That One (Cancelled) Sonic FNF Mod?

An FNF Sonic mod where you and BF battle him in a blizzard was canceled, but before that happened, it was still in production up to a point, which is what we offer you to play right now and see what could have been. Quite a lot of songs were already made, so it would be a shame not to be able to experience them:

BF VS Sonic in the snowstorm, an FNF canceled mod is here!

Whether playing in the story mode or free play mode, winning is done in the same way, by reaching the end of the songs. To do that you need to play all your notes according to the charts, so when you see arrow symbols float and match above BF, press the identical arrow keys at the same time.

Don't miss hitting notes too many times in a row, or you lose and have to start again from scratch. We wish you all good luck and all the best, hope you stick around for more fun as well!