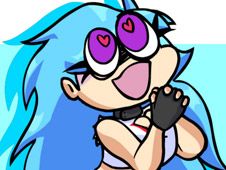 What is FNF Vs Skyblue?

Skyblue is yet another awesome version of the popular fangirl character Sky, who you now have to defeat on quite a tracklist of new and fresh songs for you to enjoy:

After you make your choice between the story mode and free play mode, give your best to reach the end of the songs in either case, which is how you achieve victory.

For that to happen you need to hit arrow keys at the same time as the identical arrow symbols match above BF's head, which is how you hit notes according to the charts.

If you miss hitting your notes multiple times in a row, you lose and have to start again from scratch. Good luck and all the best we now want to wish you all!