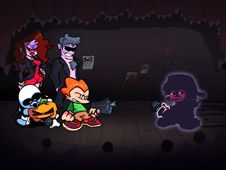 What is FNF Corruption Outnumbered?

FNF Corruption Outnumbered features a one-song-only battle where the song is nine minutes and it features a corrupted BF going up against the whole original cast, one after another. Help him win, this won't be an easy fight!

Only the most skilled can complete the FNF Corruption Outnumbered mod!

Simply watch for when arrow symbols match above BF's head, and when they do, press the identical arrow keys to hit your notes, at the exact same time. Do it until the song's conclusion to win, because if you miss hitting your notes too many times in a row, you lose and have to start again from scratch. Good luck, the best we wish you!