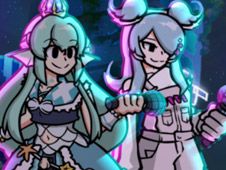 Pomu Rainpuff replaces BF as the protagonist of this new FNF LazuNight Funkin’ we are delighted to share with you right now, where you have to help her defeat her friends in a musical battle right now on the following songs:

Whether you're playing in the story mode or free play mode, victory is achieved in the same way, by reaching the end of the songs and to do that you need to hit your notes according to the charts until that point.

To do it, when arrow symbols match above BF, that is when you press the identical arrow keys. Don't miss hitting said notes too many times in a row, or you lose and have to start again from scratch. Good luck, enjoy!