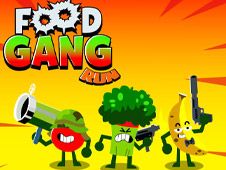 What is Food Gang Run?

Food Gang Run is one of the silliest and most fun action-adventure games with running and shooting, all of them elements we already know you really love, and we think that they are only going to be made even better by the fact that they feature food as characters, starting off as a cherry, and then unlocking the broccoli and the banana as well.

Use the right and left arrow keys to run, and the spacebar to jump. Your character will already move forward automatically, but it still needs guidance, and it will also shoot automatically as other foods in the kitchen keep attacking it.

Move so that you position yourself in front of enemies, shoot them down, both on the ground and in the air, and get the coins that they leave behind to get new weapons and skins for them.

Avoid the many traps along the way too, such as the spikes, and being shot at, because if you lose your health bar completely, you also lose the game. Make sure you grab power-ups when they appear too.

It's really that simple and exciting, so start right now, have a blast, a shootout blast, and make sure that you stick around for more fun to come today and every day!

Use the arrows, and the spacebar.