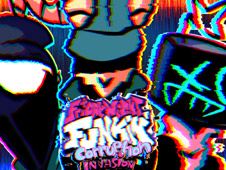 A Corruption Invasion of FNF characters has begun, where fan-favorites such as Whitty, Hex, and Tabi have gotten the Pibby Virus, so the only way to bring them back to their normal selves is to help Boyfriend defeat them in rhythm battles, something that you will do on the following extensive tracklist:

Whether you choose to face these antagonists in the story mode or free play mode, beating them is done in the same way, by reaching the end of the songs, which is only possible if you keep hitting your notes according to the charts.

This means that when floating arrow symbols are matching above BF's head, get the timing right and press the same keys at the same time to hit your notes.

Presing keys early, late, or the wrong ones means missing notes, and if that happens too many times in a row you lose and have to start all over again from scratch. Good luck, enjoy!