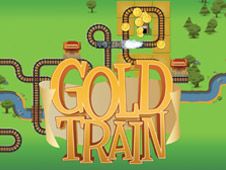 What is Gold Train FRVR?

Gold Train FRVR is not a train-driving game as the title would make you believe, but it is one of the internet's best puzzle games with railways, which is a genre that has appeared many times before, in the world associated with train games, where you make sure that the engines reach their destination by completing their steel roads because, without them, they won't be able to advance. Do the same, but have even more fun, right now!

Solve the puzzles to let the Gold Train FRVR steam ahead!

Use the mouse to drag tracks and put them where those parts are missing, swap them between one another when needed, or you will simply need to pick them in the correct order and place them. If the train reaches its station thanks to your tracks, you complete the level.

A new puzzle will then be given to you, and so forth, so we hope you complete them all, and ensure that the trains get no delays, even if it is one filled with cargo and that cargo is gold since the banks are waiting for it. ALL ENGINES GO!