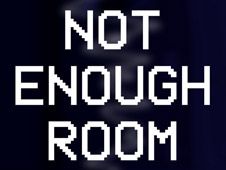 What is Not Enough Room – FNF Mod?

Not Enough Room is a brand new FNF mod where you have two unknown things battling each other through music, on the same song, but you can pick to play it in two difficulties. Either way, you're going to have plenty of fun!

After choosing the desired level of difficulty, make sure to hit notes for the character on the right by pressing arrow keys at the same time as the identical arrow symbols match above them. If you do it until the song concludes, you win, but missing your notes multiple times in a row will lead to your loss. Good luck, enjoy!