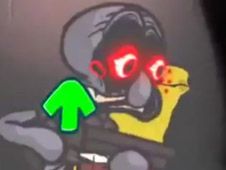 What is FNF MCM: Judgement Day?

Our newest FNF Mod features the song known as 'MCM', but this new edition is called Judgement Day, and it is really awesome because it features you and Boyfriend teaming up to defeat cursed versions of Nick characters like Squidward,  Patrick, SpongeBob, and Mr. Krabs. Are you up for it?

When you see floating arrow symbols match above BF's head, that is when you need to press the identical arrow keys to hit your notes and keep doing it until the song ends to win, while being careful not to miss your notes too many times in a row, because that instead will lead to you losing, of course. This happens if the health bar depletes. Good luck, enjoy!