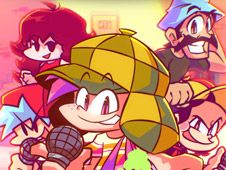 FNF El Chavo & Quico | El Chavo Del 8 T2 is a mod that sounds really complicated from its title, but believe us that it is not, as you simply need to help Boyfriend defeat the likes of El Chavo & Quico on the song called 'SU-Vecindad'!

Watch for when arrow symbols float and match above BF's head to the right of the screen, and at the IDENTICAL time make sure to press the SAME arrow keys to hit your notes, doing so to fill up the health bar for yourself and reach the end of the song to finally win.

If you miss notes instead, and you do it too many times in a row, your health bar depletes and you lose, which forces you to start all over again from scratch. Good luck we wish you all, but, most importantly, we hope you will have great focus, since that is the key in these rhythm games!