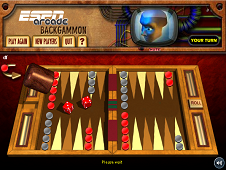 What is Backgammon 3D?

Well, what matters in the new game is to reach to pass these missions, after which the game will increase the intensity, your opponent will have more power and will try to knock you down, but you have to keep them chest if you want to win any difficulty level. A super 3D Backgammon game where you play against the computer robot, but great care because it is a good computer, trying to beat you with moves and tactics always very interesting and new. Be always on stage, trying to pass all levels of difficulty that you have a short time to win as many high-value activities in the new game. Be careful movements oponetului as your guest and try to throw the dice so as to make good moves for both you and other players. Great care and attention to different levels of difficulty that you have in the new game, vote every game that you play table so that at the end nedem levels of difficulty to who is the most widely played and why you have chosen to do this thing. After the game super game of backgammon offered by Unity 3D you can tell us a comment and nine through how did you like and why you have chosen to play this new game.