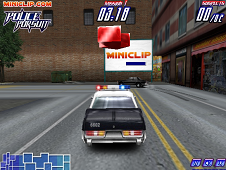 What is Police Pursuit?

Police Pursuit 1 is the most beautiful 3D games with car cops and police chases through the city along with all the others, people and cars in the middle of town you will have to dodge them and eventually you get to the end because only missions so you can catch the thief who managed to escape with a sports car. Great care to all the obstacles that you have in various poses, trying to dodge them and this way you get to earn increasingly more difficulty levels reaching in this way to become the best cop in the new game for children. Be as careful, find solutions required police catching thieves and jail inmates who escaped from the city and police took the van getting to run with money being taken from the bank that was broken near the park. You can collect bonus points plotted in difference missions so you get to earn increasingly more bonus points that will help you get to the top position. The care about the accidents that might-have with the police car that you drive, do not dare to overtake cars injure citizens of this city and other cars or people stepping on the pedestrian crossing with beacon though you're on, and police car sirens works in red and blue, what matters is to give a positive example and put handcuff succeed thieves eventually reaching mission to win the Romanian secret police. We have to mention that the super Pursuit game Flash version is offered in Unity 3D and graphics quality is great and the game was taken from the site Miniclip.

the arrows will have to drive police car as well in different situations so you manage to November castitgi bonus points in the new game copies.