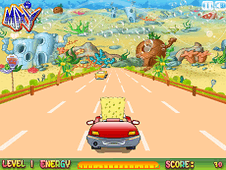 What is Spongebob Squarepants 2?

Spongebob Squarepants 2 is a sequel of the game Spongebob Squarepants 1, in which the protagonist has Spongebob, favorite of yours. In this game you use the arrow keys to control the car super fast that Spongebob runs in a street race crazy. Let's put in this race because the challenge friend. Give all your best to get a score that any player, even Patrick who is an excellent driver, be amazed. For this, it requires maximum concentration and attention. Collect all the hamburgers that they see them on the road deoareec you fill the energy bar. Once you are off the energy, the machine stops and your score remains exactly as it was before ending energy. Prove us that you are a real driver and everyone ceialalti should be envious of your way of driving. Remember that this game is the levels. Each level has its own difficulty, so how much more you before, the degree of difficulty will increase. Success! Hopefully this game is to your liking and invite you to try the other games on the site. Thank you!

Funkin’ at the Roundtable