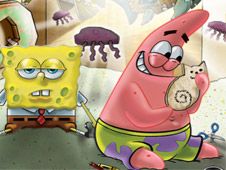 What is SpongeBob SquarePants CardBORED?

You can never go wrong by playing new SpongeBob Games online on our website, since this is Nick's biggest star in the world of animation and games as well, and SpongeBob and Patrick always have cool shenanigans happening around them that they invite you to join in, just like it is the case today with SpongeBob SquarePants CardBORED.

While Spongebob was just sitting around and being bored, Patrick used this downtime as an opportunity so he used his vivid imagination to turn regular cardboard into all sorts of creatures, with him now playing the role of a mafia boss who is holding a cardboard cat in his arms, and SpongeBob decided to join the fun as his enemy in a fighting game where you have to help out SpongeBob take out the cardboard creatures Patrick throws at him.

How to fight the cardboard creatures:

You will simply use the mouse to walk around with SpongeBob, and when you are close to a creature made out of cardboard that you have to defeat, swipe over it to slash it with your weapon, and you gain points defeating it. Hopefully, you will defeat all the enemies and get lots of points.

At the same time, be very careful to keep your energy levels up, because if they go down too much, SpongeBob will be too tired, and you are going to lose the fight. We hope that does not happen, and we want to wish you all good luck and lots of fun!