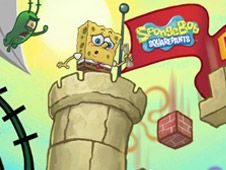 Tower defense games online are already really fun to play, without a doubt, but they can only become even better if they add Spongebob and his Nickelodeon friends into the mix, just like we are happy to say is happening right now and here with the addition of the game called SpongeBob SquarePants Grand Sand Fortress.

Help Spongebob build the defenses of his sandcastle!

The reason why Spongebob needs your help is that Plankton is once again convinced that our yellow sponge under the sea has the recipe to the Krabby Patty, so you have to build a castle in order to protect SpongeBob from the waves of attacks by Plankton and his minions.

To build the walls you use the arrow keys to direct the blocks to the spot you want them, and you can even rotate them by using the spacebar, simple as that. The sand blocks are strong, the stone blocks are stronger, and the brick ones are the strongest, so use them to the best of their capabilities.

If you can build a block made out of four blocks of the same kind you will get extra building time, since you are running against the clock in helping out Spongebob. Good luck, and we hope that you will prevail against Plankton once more while having lots and lots of fun!