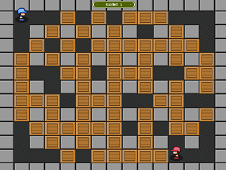 What is Playing with Fire?

Playing with Fire is another game that we have prepared it on our site for you to be played, because in the end that is all that matters because we are totally sure that you would be playing a lot of times in there without anything bad to ever happen to yourself. Never make anything that you would regret because otherwise you would not be able to determine everythig that is to be done in there. Try to behave so nice and so great in such order that you are going to feel it like nothing else could ever happen. Figure out all the details in which you would be doing everythig in the nicest ways. Settle down really fast and manage to get us doing something that you would have never thought about. Get ready for something like that and go ahead in all the conditions in which you would be totally done with them. Never fall appart because you have to bomb all those boxes and in the end you need to take down your enemy, well at least before he does that. Be really careful and never let anyone like him get you because that would mean that nothing bad could ever get to you now.

Use the arrows and the ;