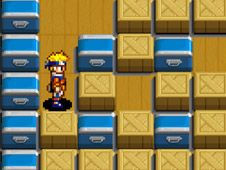 What is Naruto Bomb?

Naruto Bomb is a masterful combination of Naruto Games and Bomberman Games since both categories stand on their own as two of our most popular, so, obviously, we could not have missed this chance to share this new game with you all where the bomb it the format is elevated by the addition of the anime characters, in addition to being 2-player at the same time!

Naruto and bombs, what could go wrong?

Choose to play against the computer in the 1-Player mode, or against another real player with the 2-Player mode, but even in that case, you can still add more virtual enemies to join the challenge, because the more you take on, the more points you will score.

The characters you control, such as Naruto, Sasuke, or Sakura, move around the maze guided by you, having to drop bombs both to clear paths through the walls and finally to trap your enemies next to a bomb that will explode, killing and defeating them as such.

When you achieve clearing and bombing all the enemies at each level, it is cleared. Use the following controls:

We want to wish you both good luck and all the best, and we invite you to stick around for more fun to come, you can never go wrong with it!