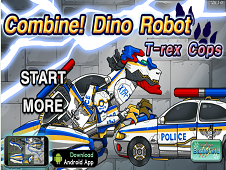 What is Dino Robot T-Rex Cops?

Dino Robot T-Rex Cops is definitely one of the greatest, coolest and so amazing building and puzzle robot game possible, where you have to use the mouse in order to prove that there is no other better adventurer than you so let's show off your talents and aptitudes in the following game. Dinosaurs are dangerous and so powerful and they are gone for such a long time but now they are back, thanks to the science, as some powerful robots. Your mission in this cool and so amazing game will be to build up some of the most awesome and so cool dinosaur robots, which could be some patrol cars when it's needed of them and some ordinary robots, dinosaur robots in the rest of the time. At the beginning of the game, you can choose from two categories from this game which are actually difficulty levels. Pick up from Easy or Normal version of this special game and the easy version consists in building up the patrol police car, piece by piece and the other one, the normal difficult one, consists of building up from the same pieces of the police car, such a great patrol robot. Good luck for the last time and do not waste your time anymore and start this building mission right now, with these steel pieces!