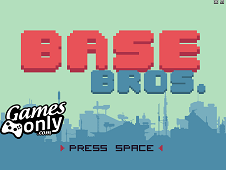 Basebros is such a great shooting gamew which offers to you the unique occasion to use the arrow keys and the A, S, D, W keys in order to go with both of your brothers to the right bases from the groun and from there, take the control over those machine guns and start shooting over and over again all the targets and the spatial ships which are coming to the sky in the following adventure. This isn't going to be easy at all, but it will definitely worth the effort so remember that this game must be played by 2 players os it's a game for two! Good luck in this awesome challenge and prove that you are the greatest when it comes to shooting! There will be some ammo zones and areas, which must be protected successfully by you so do not let them throw too many bombs or shoot your restricted areas with ammo because destroying them, involves losing the game by you and your mate. Good luck and there will be levels where you have to kill soldiers just like you, not spatial ships so adapt to the situation as soon as it is possible! Cooperate with each other with no problems and kill them all!