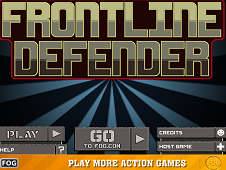 What is Frontline Defender?

In frontline defender, the goal is to stay as close as you can to the line from the middle of the both battle fields. There will be a neutral zone so you have to protect it with any price. There will be fighters from different zones of the battle field, trying to break the fences and reach the neutral zone, in order to cross to the other zone, for starting the war again. The goal is to shoot as many of thugs and fighters as you can, because they are so dangerous and full of surprises, especially anger. Shoot them all but watch out, because they won't die from a couple of shoots, but so many of them and all of them must be placed in strategically places, like head or heart, because this way they will take more and more damage. Good luck and make sure that you are the best shooter in this cool and so incredible frontline defender shooting mission and prove that you can easily shoot some bullets in those thugs. Do not let them destroy the fence so each hit received by the fence, will be felt by your health meter in the top side of the game screen. When you run out of life, you're dead!