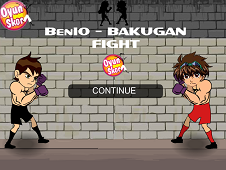 What is Ben 10 Bakugan Fight?

Ben 10 is one of the greatest super heroes in the fantastic world of Cartoon Network animated characters but you know what? He isn't the only one who's got some super powers meant to protect the world or different dimensions of creatures, but there is also Dan, from Bakugan, probably another greatest TV animated series from the same TV channel! This time, there will be an epic fight between these two super heroes, Ben 10 the greatest kid who has the ability to transform itself in any powerful alien available on his Omnitrix and Dan Kuso, the master of Bakugans, the creatures from the other dimension, named Vestroia! You will control only Ben 10 in this boxing challenge so in the middle of a boxing ring, there will be only you, Ben, vs Dan Kuso, a really powerful opponent. Use the arrow keys in order to walk in the ring, in any side you want and the B, N or M keys in order to hit the opponent, You can only put him down with a great punch delivered with the M key or from different combinations. Keep the SPACE bar pressed in order to defend yourself from the fury of the opponent and in the top side of the game screen, you can see always the amount of life left for any of you. The first who run out of it, loses!