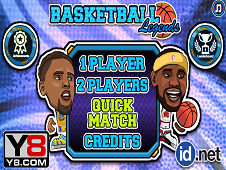 What is Basketball Legends 2?

Basketball is probably one of the most famous sports from all around the world and it's especially played by tall players, because it is easier for them to reach the basket but that's not a rule, because talend doesn't depends on the height. In this special and so cool Baksetball game, you have to deal with some of the greatest basketball players ever, trying to become yourself a real basketball legend and you and you can only do this through a lot of championships, not only quick matches, winning different competitions and of course, making sure that you will gather more points than your opponents not only in championship, but in the match too, scoring often than him. You can only play with a friend thi awesome game, because there exists two players mode so it's exclusively your choice. Which ever you would pick, make sure that you will be a real basketball legend at the end of this awesome sport game so do not forget to toss using the Z key, defending on X and of course, doing some super dunks when it's possible, following the steps indicated to you by the game menu. Good luck and play some practice matches until you catch the movement and make your opponents cry!