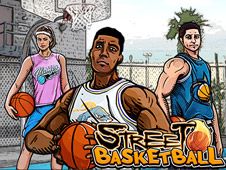 What is Street Basketball?

Since there are so many of them out there on the internet, our team makes a point to only bring over the best of the best when it comes to basketball games online, which is the reason why right at this moment we can share with you all the awesome new game known as Street Basketball, where instead of the pitch in the stadium, you will playing rough basketball right on the streets of the city!

Start by choosing the player that you want to be represented as, having two boys and one girl as options. There will be ball indicators for the angle and speed at which shoot your throw, so stop them in the right spots to get the ball in as many times as possible, getting one or two points, depending on what kind of ball you throw.

You are playing against time, so before the timer reaches 0 seconds, try getting in as many hoops as possible, and increasing your score, and proving that you are a great street baller! It's all that simple, so start now, and don't hesitate to tell all your friends about this game as well!