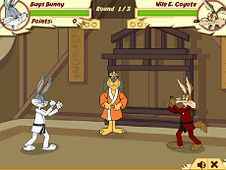 Karate Challenge Hong Kong Phooeys is the new free game Looney Tunes where you have to prove your combat skills to be able to defeat your opponents in a professional ring. If less daring seems so hard, but do not forget that your opponents are driven by some masters in the art karatelui, which means that every game will be a challenge. In this game you use the keyboard. You use the arrow keys to move and A and S to attack with fists and feet. Each level has its own degree of difficulty, so the more you delve deeper degree of difficulty will increase. The match will be of 2.3 matches won, so if you lose once, you have the chance to destroy the next and so to become a champion. Before you go into battle you an instruction manual that I advise you to read it because it will be very useful. Win all battles and become the strongest champion. Hopefully this game is to your liking and invite you to try the other games on the site. Thank you!

Use the Arrow keys for moving and A, S for attack.