Santiago of the Seas Word Blocks 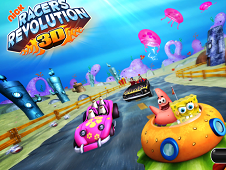 What is Racers Revolution 3D?

If you feel the need for speed, and some awesome racing games with Nickelodeon characters would be just the best time for you right now, then you can play Racers Revolution 3D, also known as Nick Racing Stars, featuring characters from Spongebob, Ninja Turtles, Power Rangers, Henry Danger, and more shows you love.

The characters that you will be racing with are all going to have their own zany cars and motorcycles, with their vehicles being built to reflect their personalities, which also applies to their paint-job. Obviously, the goal is simple, as in all racing games, which is to cross the finish line before all the other racers!

Press the right arrow key to accelerate, change between the lanes using the up and down arrows, and when you find speed boosts, drive over them to get faster! Avoid driving into obstacles that can slow you down, such as muddy puddles, oil stains, and more, and you can also jump over them by pressing the spacebar.

You can also bump into other racers to slow them down or use upgrades to your advantage. You find the pickups at random places on the tracks, so grab them, and use them! Pick your favorite Nick character, and with their custom car, give it your best to win the races and prove yourself the fastest Nick racing star out there!

the arrows will have to drive cars in this 3D racing game.