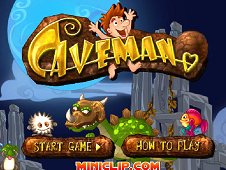 This caveman has no idea about what's going on around him but he only knows the danger and the things which are not dangerous at all for this so let's get to the work right now, trying to successfully defend this guy through the attack, from different dinosaurs and this kind of creepy beings from those times, in this platforms jumping and shooting game, where you need to use a sling in order to aim and toss the rocks to the dangerous cretures, chasing the caveman all the time. They are so many and you are only one but with the right strategy, they've got no chance in front of you but it isn't enough to only hit them once. Hit them more times until they turn into some huge ground balls and after they blow up, they gives you something useful, like some food or something like this. Collect the bonuses and only after you've killed every single being from a level, you can get higher on the platforms, where new levels, beings and challenges are waiting for you! Good luck and become the greatest help for this awesome and so cool caveman, being his number one assistent!