The Tom and Jerry Show Blast Off

Tom and Jerry Show the Chase is On

Lets Create with Tom and Jerry

Tom and Jerry Show I Can Draw 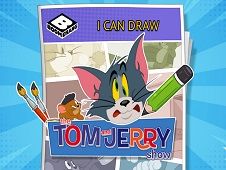 What is Tom and Jerry Show I Can Draw?

This game is based on Tom and Jerry cartoons. We all know Tom who keeps trying to catch Jerry, but Jerry is smarter. There are other characters like Spike and Tyke, Spike protects Tyke but he doesn't support Tom. Butch is also a cat but is a rival to Tom, sometimes he fights for women, sometimes for food, but never agree whit one other. There are other characters, but they are no so important.

This game teaches us to draw our favorite characters, more exactly Tom, Jerry and Spike. You have to make eight drawings and you'll find fun actions in those drawings. You'll have to draw only the heads of the characters at first, but if travel the levels you'll get to draw the whole body of the characters. This game tests how careful you are to the details and your talent for drawing.

In the first drawing, we can see Tom and Jerry whit a stick in his hand, Tom doesn't look very good because of Jerry who hit him whit the stick. In the next drawing, we see Jerry taking dinner, he eats a piece of cheese. In drawing three is Tom who probably prepares a trap for Jerry. The next drawing is a little bit different, at this time we have to draw the whole body of Jerry that's next to his house. The same thing we have to do whit, Tom.

You'll see Spike who's ready to attack Tom, because he doesn't support him. Tom upset him in many times. And in the lest two drawings we see Tom and Jerry who are back at war. In the first image, Tom holds a hammer in his hand and is determined to eat Jerry. In the last picture, we see how smart Jerry is compared to Tom.

You can use the mouse to draw but you have to be very careful about the details. When you finish a character, your drawing will come to life. After finished all the drawings you can show your friends and show them how much talent you have in the drawing. Have fun!