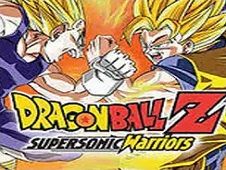 In this classic Dragon Ball Z game on our website, you must fight to win! This is a fighting game with multiple stories in it. You can choose to play the story of multiple characters. The game features many playable characters, these are Goku, Gohan, Piccolo, Krillin, Vegeta, Future Trunks, Captain Ginyu, Frieza, Android 18, Dr. Gero, Cell, Majin Buu, Gotenks.

The game features multiple game modes like Story Mode, Z Battle Mode, Challenge Mode, Training Mode, and Free Battle mode. The Story Mode of the game lets you choose a character and play their unique story, each having eight battles.

In the Z Battle Mode, the player fights against 8 players, and the player is ranked and scored at the end of the 8 battles.

In the Challenge Mode, the player is put against a chosen team and as the player defeats more teams, the harder the teams get and the more points the player gains.

The game places you and your opponent in a large environment where you can fight your opponent. The player can use many variations of close combat attacks, some of which are stronger than the other. The player can also charge their "ki" meter and fire "Ki Blasts". Ki Blasts are strong balls of energy that deal massive damage depending on how high the "ki" meter was when firing the blast.

All characters have 3 unique "Certain Kill" abilities that deal huge amounts of damage against the opponent. The ability depends on the player's location, above, below or level to the opponent and they can cost 50% or 100% ki.

Each character also has three levels. These levels make the character stronger and are sometimes represented by sprite changes. This is used in Story Mode to indicate a player's strength. Have fun playing Dragon Ball Z Supersonic Warriors!