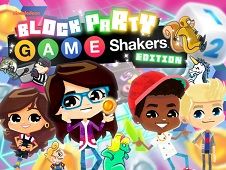 Block Party is a well-known series of games from Nick, but this time we will have as main characters those from Game Shakers and some Kenzie, Babe, Hudson, and Trip. After choosing which of the four will be our partner in the game Block Party: Game Shakers Edition, you will have to decide if you want to create a board or choose one of the created ones.

The game uses dice, which is why luck plays an important role in this game because it depends a lot on what dice you hit. Depending on the dice you threw, you will have to go that route, and when you stop on a certain number you will have to enter that activity and try to earn as many points from each activity that you have. you're done. In the game you will have a choice between different objects: alien power Harmon (protects the player from all negative effects for a turn), dirty blob glop (for a turn, stop all players that land on the space behind you), or even Scubapro kick back opposing players if they pass you.

try to complete each route you have as best you can, with as many points as possible, because this way you will be able to win the competition at the end of the game.

use the mouse to play