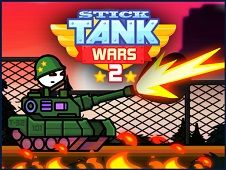 What is Stick Tank Wars 2?

Tanks! Everyone likes tanks, and this time you are in control of one! The goal of the game is to shoot enemy tanks. You are given a choice between normal and hard mode. In the normal mode, the enemies are less powerful and don't shoot back as often. You will spawn in a random stage each time you defeat the enemy. Each stage has different objects on it, some stages have blockers that move up and down and block your shots towards the enemy.

To defeat a tank you have to shoot it twice in the normal mode. On some stages, you may also encounter helicopters. Helicopters are dangerous because one shot and you're gone. The helicopter can be optionally shot down, only the enemy tank is needed to shoot down. On the stages, you will find powerups that fall from parachutes. There are many powerups that you can collect, the speed powerup increases the speed of your bullets, the heart powerup gives you HP.

Killing enemies gives you money too, this money can be used to buy better bullet types and also tanks too. There are 4 types of bullets, the regular bullet is the one you start with and the enemy needs 2 shots to die with it. The regular speed bullet increases the speed of the regular bullet. There is also the rocket bullet, this kills the enemy in 1 shot, it also has a faster variant. Tanks also have speed and stronger variants.

Time to shoot down those enemy tanks!