Game of the Goose 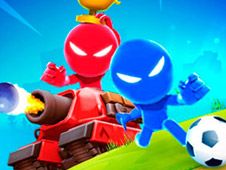 What is Stickman Party?

We know for sure that there is a lot of interest in playing 4 player games online on our website, considering that there are lots of groups of kids, especially boys, who get together to play computer games, and this is what they will be able to do right now and here with the game called Stickman Party, which is even better because of being an action-packed game featuring stickmen!

You and your friends are invited to join the party of stickmen right now!

Not only is this game playable with up to four players at once, competing against one another, but you do it in various mini-games, so even if you're not good at one, you might be skilled at another, and we're sure you will all manage to win and have fun!

Let's see what the games are all about:

You will be given the keys you need to use in each game, and they can be different depending on the format. Good luck to all the players, and we definitely hope to see you try out all the mini-games we've got to offer in this one huge pack of fun!