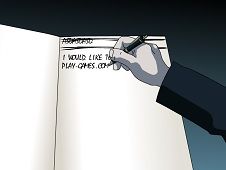 Death Note Type is a game inspired by a Japanese story, in which a boy named Light Yagami discovered a notebook that he began to use differently from all people.
Specifically, Yagami realized that the moment he typed the names of people in his notebook, these characters died. Once he noticed that this was happening repeatedly, the main character of these games thought of saving humanity from evil people, thieves who commit robberies, and acne from vandalism.

In this sense, our superhero started looking in the city where he lives criminals, to find out their names and write them in the notebook. In Death Note Type, you will be able to simulate writing in this notebook the names that you consider bad, but this game is a pamphlet and nothing bad will happen in reality.
This version of the game is the original, which is made in flash, which is currently emulated by Ruffle but does not work perfectly. In the future, we hope that we will be able to unlock all the functions of the game so that you can play the whole game.

At the same time, you can try the HTML5 version of Death note type for mobile.

use the keypad to insert the name of the person.