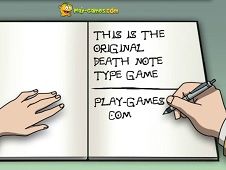 What is Death Note Type Game?

Death Note Typing game is a very popular game on www.Play-Games.com in which you will meet Light Yagami, the main character in the Death Note cartoon series. The plot of the cartoon will present the young student Light who is very upset about all the crimes he hears every day in the media, and he promotes that if he will one day have a superpower, he will want to kill them all. those who caused these crimes.

One day, Light finds a notebook that is said to be made to kill everyone in it, which is why Yagami tries to practice and understands from the first hours that everything is real.
Once convinced that this notebook is true, he begins to watch the news on TV and read the newspapers, at which point he writes down all the names of the criminals or criminals he sees, in order to get rid of them.

After a short time, he notices that this notebook begins to take effect, and all the names of the characters that appear in the notebook die soon.
The police and Interpol begin a general pursuit after the young student who leaves his nickname of Kira at every murder.
The game we created on Play-Games.com is an HTML5 game, which can also be played on mobile. The first version of the game was just flash, but due to the fact that flash games no longer work optimally, we decided to create a version adaptable to the new technical requirements.
Death Note Simulator is now available for mobile and tablets, try it :)

What do you think about the game, do you like it?

Use the KEYBOARD to play.