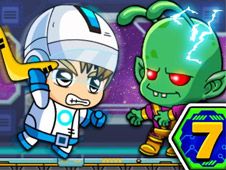 What is Zombie Mission 7?

The Zombie Mission Games series is probably aiming to become one of the longest-running series of online games with zombies, and we are all in for it, since no game until now has disappointed, and this won't be the case either with today's one, called Zombie Mission 7, a co-op game in two players where you have to face off with the most dangerous zombies in the world.

This game literally elevates all of its predecessors, mainly because you have left the Earth, where you've already dealt with the zombie infestation, and now will have to defeat the zombies that have reached all the way up to the space station.

As you and the other player work together to move from one level to another, rescue survivors, get back precious data from the space station and watch out for traps and enemies. Kill enemy zombies to get lots of points in return, of course!

How to play Zombie Mission 7 online for free

Just like in the other games from the series, the levels have platforms in them, and you have to stroll through the courses while defeating enemies and doing all the rest of the things in your mission statement.

Player 1 uses W, A, S, D to move and jump, F to hit or shoot, G for grenades, Q, E to switch weapons. As for Player 2, they use the arrows for movement and jumping, L to hit/shoot, K for grenades, O, P for changing weapons.

We hope you make a great team and accomplish your goals, and we want to wish you all good luck and lots of fun like only here can be had!