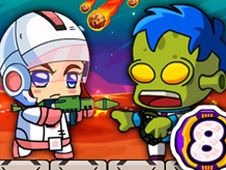 What is Zombie Mission 8?

There is no doubt at all that one of the most appreciated series of original games in 2 players from our website is the series of Zombie Mission Games, an action-adventure game saga where you play the role of two soldiers, usually a man and a woman, who have to deal with the zombie apocalypse while fulfilling various missions, and you are doing it once again today, with the amazing new game called Zombie Mission 8!

Defeat the zombies on the Mars Colony!

The game picks off right after the seventh game in the series, and once again you are dealing with zombies in space, this time on Mars, where humans have colonized the planet, so now that zombies appeared there too, they need to be defeated!

Go on the planet and defeat the zombies while rescuing scientists and other people trapped by them, and in your adventure, you will use different vehicles as well as weapons to survive.

If you find any weapons, ammo, upgrades, or power-ups along the way, make sure to grab them and use them to your advantage. If a meteor shower comes, hide in the shield cabin until it passes over.

As for the controls, Player 1 moves with W, A, S, D, hits with F, throws grenades with G, jumps with W, and switches weapons with Q-E. For Player 2, you use the arrow keys, L, K keys, as well as the O-P keys.

Good luck to both players, we hope you co-operate fully and well together, clear all the missions and the levels, and have fun with even more two-player games on our website when you are done with this one!