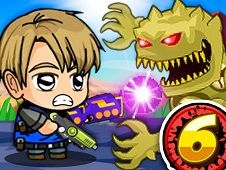 What is Zombie Mission 6?

On your way, you find a dead zombie with coordinates on it. You must free the civilians and free the zombies! In this platformer game, you have to go forward and shoot any zombies on your way, and to free any civilians you may pass. In each stage, there may be civilians and portable media to collect, you must collect the portable media and free the civilians to move onto the next stage. You have a gun in your hand to shoot the zombies with and you can also throw grenades to clear out a lot of zombies if necessary. You can also wall jump to help you get up on a platform that is too high.

In each stage, you have obstacles you have to get through such as platforms that can only be opened by activating a switch or by pushing a box on a switch. Civilians can also get infected and become zombies, in that case, if you approach it soon enough you can treat him and avoid the civilian turning into a zombie. There are multiple types of zombies including the normal zombie, infected civilian zombie, jumping zombie, bomber zombie, and many more! Also, computers that need to be hacked can appear on the stage to be able to open the hatch. You also have to be careful of the swinging axes that take a lot of hp if you bump into them.

The game can be played with another player as well so you can fight against zombies with your friend too! Get ready for zombie fighting action!