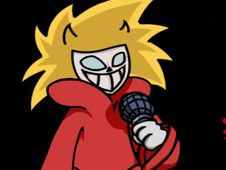 Daddy Dearest has sent a new enemy to defeat Boyfriend in a music battle, and this time it's an assassin called Red, one of the scariest antagonists in this series so far, which is precisely why you should play Friday Night Funkin' x Red right now and here since you will have a fresh experience that is also fun from start to end!

Who is Red from FNF?

Red is a villain who has blond spiked hair, wears a creepy white mask straight out of a horror movie, a red hoodie, and a really demonic look, as he comes straight from hell after Boyfriend! Examination, The-real-deal, and summing-up are the names of the three custom songs you will duel him in this game.

How to defeat Red in the musical duel:

Just like in the previous games of the series, use the arrow keys to hit all the notes properly, pressing them at the correct time, which is when their corresponding arrow symbols from the screen are going to match with one another, so that is the time when you press the keys. Doing it right turns the bar green, and if it is fully green, you win.

Choose the level of difficulty you think is best for you, pick between the story mode and free play mode, and then give the game your best, like only here is possible, where we invite you to play the other games of the FNF category when you're done with this one!