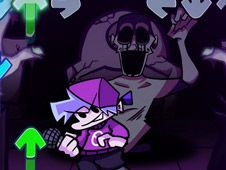 FNF Strangle Pokemon Red is a really interesting mod that takes inspiration from a creepypasta of Pokemon called Buryman, and Boyfriend needs to escape this evil and scary trainer and Pokemon duo by beating them on the song called 'Rigomortis'.

BF VS Strangle Pokemon Red, a musical horror show is about to unfold!

To win you need to reach the song's end, something that you do by playing all of its notes according to the charts until the conclusion. To do that you watch for the moment when the arrow symbols that float from the bottom match above BF's head. Keep at it, but know that if you miss multiple notes in a row, you lose and have to start again from scratch. Enjoy!