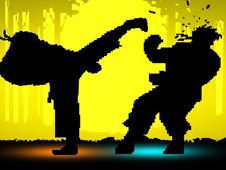 What is Shadow Fights?

We know how important 2 player fighting games online are for boys all over the world since fight games have been a staple in the world of gaming ever since its dawn, and it has always been more fun to challenge another real player that is next to you rather than fighting against the computer, which is the opportunity we provide you now with, in a martial arts fighting game called Shadow Fights!

The road to becoming the world's greatest shadow fighter

The game has this title becomes the avatar that you control will be that of a shadow figure, each player having a shadow fighter that they will use in combat to defeat the other one, with the goal being to kick and punch the other player enough times so that their health bar gets depleted first.

The battle takes place along three rounds, with the player that wins 2 out of 3 rounds becoming the winner, simple as that! The Blue Player uses the W, A, S, D keys to move, F to punch, G to kick, while the Orange Player will use the arrow keys for moving, K for punching, and L for kicking.

If you don't have anyone around, play the 1P mode, but, either way, you will surely have a blast of a time, so when you're done with this game, continue the fun by playing similar games on our website that we're sure you will also enjoy!