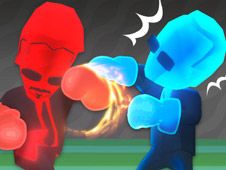 What is Fire vs Water Fights?

Fighting games online in 2 players are always going to be way more fun than those you play by yourself since it's not as challenging to battle against bots as it is a real-life player who can react faster and better, and this is precisely the kind of awesome experience we invite you to have right now with the 3d-rendered Fire vs Water Fights!

It's the battle of fire and water, who is going to win?

After being thrown in the arena, fight one another, hit one another, so that you deplete the health bar of the enemy completely first, and then you win but don't get yourself beaten up, or you lose.

It is as simple and straightforward as that, there's no doubt in our minds you will have plenty of fun, so start playing right now, you are not going to regret it!