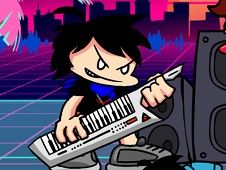 What is FNF: Miami Meltdown VS Vice?

Friday Night Funkin: Miami Meltdown VS Vice is the new FNF mode we propose to you, in which you will find three different levels of difficulty and 5 new songs.

What is Miami Meltdown VS Vice about?

Miami Vice is the story from which this fashion was created, in a series that appeared in 90 'in the USA, on NBC television port, and the whole series was directed to live in the ghetto of big cities, where we meet drug trafficking, alcohol and many other deeds condemned by law. At the same time, the police were indispensable in the entire series, and shootings and chases after thieves and traffickers are the order of the day. This time, the whole game will go to Keytar, the musical instrument you will have to play to prove to us that you manage to defeat Vice from Miami.

How can you win this game?

To win the battle to Vice's rhythms, you'll have to be good at old songs, because you'll have to dance to 90's songs. To perform a good move with BF, you will need to click on the corresponding arrow exactly when that arrow reached the top of the game. If you miss an arrow, respectively, press too late or press a wrong arrow, BF will execute a wrong move that will not be scored positively but negatively.

What songs do we have in vs Vice mode?

In Miami Meltdown VS Vice you will have to dance to the following songs: Weekend: Stealth, Annihilator, Meltdown, Gauntlet, Execution;

use the arrows to start dancing!