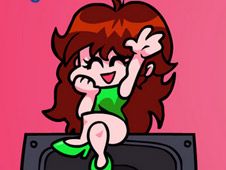 The newest free mod from the FNF Games series on our website that we are lucky and happy to present you with right now for free is this one, a cool new game called Friday Night Funkin' DAGames Edition, where a virus has entered the world of music and dance in FNF, and only if you help Boyfriend go through all the new songs and win against the viruses antagonists will he save this world from danger!

Other than the addition of new songs and new looks to your antagonists and characters, the gameplay remains the same, as this is still a rhythm game where you have to focus on your timing and skills with pressing keys at the right time.

When you see that the arrow symbols that float on the screen match with the arrows above Boyfriend's head, that is when you press the same arrow on your keyboard to hit the note.

Do this until the end of the song to win, but if you have too many misses in a row, one after another, you will lose, so don't let that happen for anything in the world! Good luck!